Fake Charity: How Not to Become the Victim of Swindlers?

Every user of social media has probably read the messages asking for help to seriously ill persons. Many of such messages cover real stories. However, it’s no secret that this niche is filled with swindlers, whose victim may become even the most cautious person.

We’ll explain how swindlers earn easy money on our trust and share useful tools and advices that will help you not to become victims of fake charity.

It’s not easy to tell the truth from lies because swindlers can play well on the heartstrings and emotions of potential victims. “Professional” swindlers do not fear to earn money even on high-profile cases. No doubt, the latter has credibility with kind-hearted people. 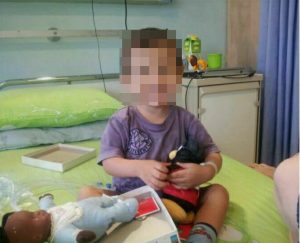 The story of an Almay-based boy Akmal Dzhangaziev is the evidence. The news about the urgent fundraising for his surgery in early 2011 throughout Kazakhstan was a good way to earn money for swindlers.

“I guess I was the happiest person when my long-awaited son Akmal was born. When I was 30 weeks pregnant, during the ultrasound the doctors identified bilateral hydronephrosis (enlargement of kidneys) in my baby. When I was 35 weeks pregnant, they diagnosed the “second degree hydronephrosis”. The day before birth, the baby had his kidneys fail and had problems with urinary excretion,” mother of Akmal, 31-year-old Dinara Zhangazieva, said to the Kazakh Service of Radio LIberaty.

The baby with such a disease had to have not only constant medical care, but also a very expensive surgery that cost 32,111 euro. This amount was raised by the whole country. The messages asking for help were posted everywhere: in the media, on websites of charity organisations, and in social media. 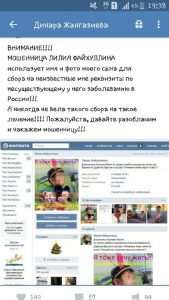 The real surprise to Akmal’s mother was to see the announcement, which contained the photo of her child and different bank details, and the diagnosis the boy never had. Somebody wanted to earn money from her tragedy.

It’s very difficult to tell the truth from lies because swindlers use the so-called “hyped” media stories of ill people. The difficulty is that fake messages asking for help do not differ from real ones. Both have photos of a patient, diagnosis, bank details and contact phone numbers.

Right now you can test yourself in our quiz “Truth or lies”. One of the cards contains a fake message:

If you failed to tell the truth from lies, you are a potential victim of swindlers. And you are not alone.

The results of our little survey, which involved 100 respondents from Kazakhstan, Kyrgyzstan, Tajikistan and Uzbekistan, show that half of our respondents can easily become victims of swindlers. In fact, they don’t verify such messages and transfer their money to unknown accounts.

What you should pay attention to

Anyone can be deceived in social media, even funds that are engaged in charity work. Lilia Gataullina, the head of the public charity association “Vozmozhno vse” (Uzbekistan), confirmed it and said she saw such frauds many times.

“There was a case with our patient. She made a post in social media and then she received a call asking her to tell the code written in a short message. They said they were transferring money to her account and she had to confirm the receipt. She was silly enough and inexperienced to trust people and she said the code and the money was charged from her card. She has two ill children she is bringing up without husband,” Gataullina said.

So, she thinks every user of social media must make it a rule to verity information prior to transferring money:

[quote]If you want to help a person who asks for help in social media, you should contact the author and ask direct questions about the diagnosis, treatment plans, phone number of a consulting doctor or a doctor in the polyclinic, which the patient visits. Also, you should ask for documents, new photos and videos. The more photos you get, the fewer doubts you have. If the patient lives in the same region as you, you can visit him/her.[/quote]

According to Gataullina, a person who really needs help will answer all your questions. However, swindlers speculate on people’s trust.

You also need to know …

… there are a lot of fact-checking tools today, which will help you to gain insight into the situation and check all the available data. They will help you to help people who are really in need.

1. Pay attention to the photo.
Use the Google or Yandex image search engines. Very often, swindlers use the photos of sick children, who sought help many years ago. If you find the same image in the older publication, you are more likely to deal with swindlers.
2.
Enter the text of the message into the search engine.
Often, swindlers use texts that were published previously.
3. Enter a phone number and bank details into the search engine.
They are probably repeated in other doubtful messages.
4. If the message asking for help contains medical documents,
verify if the medical centre specified on letterheads really exists.
5. If fundraising is done on behalf of the fund,

find its official website and check the contact details. Moreover, find out more about the fund, look through reports about previous fundraising campaigns, their results.

Don’t hesitate to ask questions. People who have nothing to hide will answer all your questions. Keep in mind that the largest part of information can be verified.